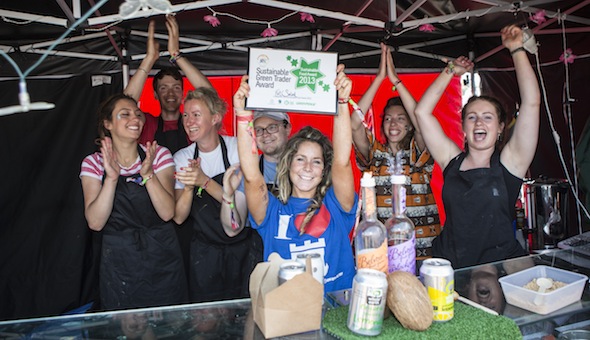 At Glastonbury 2013, a dedicated team of volunteer roamed the site asking traders about what they are doing to be clean, green and fair at Glastonbury.

We presented the Green Trader Awards to a handful of the traders do the most to reduce their impact and source ethically. There are a whole bunch of awards covering things like energy efficiency, ethical trade and sustainable food as well as the big ones – Gold and Silver (one each for a food and non-food stall). And the winners in 2013 were…

These were our other award winners…

And for the first time ever, we asked the public to vote on twitter for their People’s Choice Award and Love Zimbabwe (behind Williams Green) were the very happy and proud winners of that one! Thanks to everyone who voted!